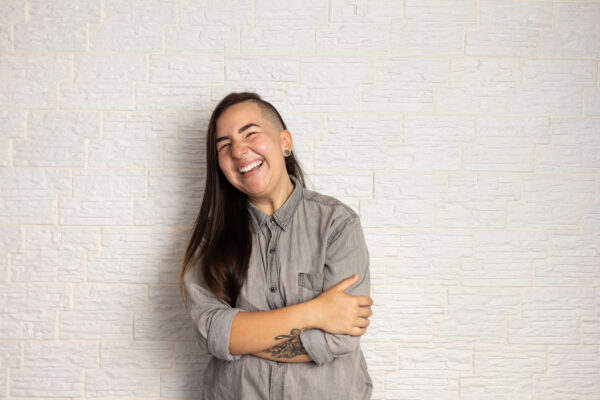 Amber had been involved with gangs and selling drugs for well over a decade, but it was after she lost her daughter to Child and Family Services that she decided to take action in her life.

“I decided to overdose myself so I could get into detox faster and they would take me seriously,” she says. “I understand that was a big risk, I might not have woken up, but I did it with the best intentions. In my head, I had no other option.”

While in treatment at Addictions Foundation of Manitoba, Amber learned about the Arlene Wilson Recovery Centre at Siloam Mission. She applied to the program and got accepted.

“This program offers something that no other program does,” says Amber. “It’s giving you your own hope… Every other place, you mess up, and you’re out. It’s not like that here. They want you to succeed.”

Amber says one of the best things about the program is how it’s client-centred and self-directed, allowing her to feel proud of her progress and accomplishments.

“I’ve done a lot since I’ve been here, and I’m working on getting my daughter back, and the staff is here to support me all the time. It’s not just about beating addiction, it’s about finding that self-love, and this place has given me that. I believe that in the future, I will take what I learned from here and pass it down to my daughter, who’s four, so she won’t grow up like this, she’ll grow up with self-love.”

After about seven months in the program, Amber says things are going really well, but she wants to stay long enough to be confident in her future.

“I think being here is the best decision of my life,” she says. “What’s important is me, right? Because if I’m not okay, nobody else is going to be okay around me. And I think that I can inspire people. A lot of people are already like, ‘[Amber], I’m so proud of you.’ These are people that I sold drugs to, people that I beat up, they say, ‘[Amber], I’m so proud of you’.”

*Note: This is a real story from a participant in Siloam’s programs; however, the name, photo and some personal details have been changed to protect their privacy.

Give where
needed most.

Give where
needed most.